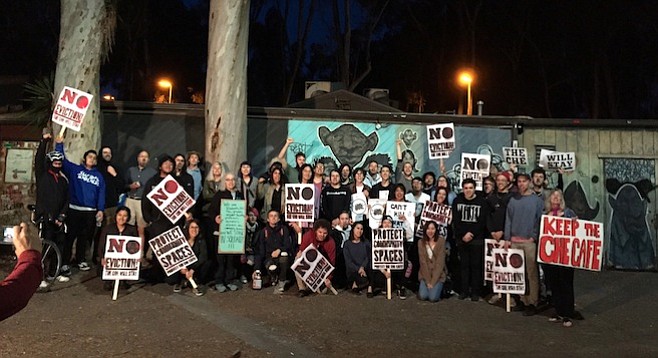 Our UCSD History page is an open blog for people to publish parts of the political history of UCSD and the UC system. The New Indicator Collective has previously published several editions of The Disorientation Manual, which generally included an article on the Political History of UCSD. This page will update and continue this history project. Please send us your recollections, photographs, artwork and documents of significant moments and chapters in this ongoing history. Send to info@newindicator.org.

UCSD HISTORY PAGE CONTENTS
Purple hotlinks, click to item.
Teal green items, scroll down past the table of contents to find it.
Sky blue urls, please copy and paste into your browser.

What it took to Save the Che Café: notes on a movement

[ For background, see New Indicator reporting on the Campaign to Save the Che Café, at The New Indicator is Back! and at Alumni Boycott of UCSD and at  WE SAVED THE CHE CAFE!]

We had to fight this attack for more than 3 years…. It really started late in 2013 with the notorious memos between Vice Chancellor Houston and his subordinate, Assistant Vice Chancellor Ratcliff (about how to get rid of the Che without waiting for the lease to expire) and then Ratcliff’s subordinate, University Centers Director Sharon Van Bruggen hitting us with lease default notices and stirring up concern amongst University Centers Advisory Board (UCAB), Graduate Students Association (GSA) and Associated Students (AS) officials. It then built to the presentation of trumped up cost estimates (by Van Bruggen) to get UCAB to balk and to vote to not only not fund deferred maintenance and needed upgrades for the Che Cafe building, but to ELIMINATE the Che line item from the 2014-2015 University Centers (UCEN) budget. That was followed by the puppet strings GSA vote to “decertify” the Che and to request that admin terminate the Che lease. Che requested the dispute resolution procedure, per the lease, the Master Space Agreement (MSA). Admin then ignored the MSA and jumped on the UCAB and GSA momentum (which admin had orchestrated in the first place) and without consulting AS, let alone seeking AS to sign off on it (which probably would NOT have happened because AS was more pro-Che at that moment) admin issued on June 13, 2014, the 30 day notice of termination of the lease.

CCC then hired Andrea Carter as legal counsel. She had already taken over from Hasmik Geghamyan — who moved to Bay Area — on the legal work to get the Che non-profit status restored with the IRS. Carter filed a lawsuit for the Che, on grounds of breach of contract, and on other grounds, and requested a temporary restraining order (TRO) against any further adverse action by admin to file any unlawful detainer (eviction) lawsuit against us. We WON THE TRO. We later withdrew the breach of contract lawsuit (without prejudice) for strategic reasons. When we did that the TRO was cancelled. Admin then filed an unlawful detainer lawsuit against us in August. We hired Bryan Pease as counsel to represent us for that lawsuit.

Meanwhile (and during all of the weeks leading up to and after the UCAB vote) we set about to mobilize public support: about 15,000 petition signatures, protest rallies and marches on campus (well covered by TV news, daily and weekly newspapers, etc.) and support statements from most of the unions on campus and from the San Diego-Imperial Counties Labor Council (representing over 100 unions), from faculty members, from alumni, from students, from musicians, lots of press releases and interviews, etc. We (alumni) announced (press release) an Alumni Boycott of Donations to UCSD and leafleted the whole 2014 Alumni Weekend events. We later learned that some frequent donors called the chancellor’s office to ask ‘WTF?” and state opposition to the eviction; even the former head of the Alumni Association. We announced (press release) an Artists Boycott of Performance at UCSD. We did “cc” to the Board of Regents on all our press releases and a lot of our communication with UCSD admin, because all correspondence with the Board automatically becomes permanent public record of the state. We arranged a meeting between supportive faculty and the chancellor, and a meeting of the UCSD Coalition of Unions with the chancellor, to tell him they were opposed to the eviction.

We appealed the trial court’s ruling. The appeal court ruled against us, and again it was based on the insanity of another technicality. Because the state decided some years ago to stop paying for court reporters to record the transcripts of civil court trials, there was no official transcript of our trial. (We should have coughed up the money to hire a court reporter for our trial, in hindsight.) Because there was no official record of the evidence and discussion during the trial, the appeal court claimed they had no choice but to rubber stamp the trial court’s decision.

Meanwhile, without even waiting for the appeal court decision, admin got the court to process the paperwork to serve the 5-day notice to quit (eviction order) and they went ahead and posted it on the Che building on March 19, 2015. That led to the March 24, 5 a.m. meeting and rally at the Che, and the start of the 121 day sit-in occupation of the Che. We had previously signed up over 100 people for a rapid response team, to show up on short text message notice, 24/7, if the sheriff’s deputies showed up to physically carry out the eviction (by removing/arresting anybody in the building and changing the locks). The occupation was a 24/7 guard duty for activating the rapid response team and notifying the press (especially the TV stations).

In May, the Save Our Heritage Organization (SOHO) issued its annual top ten list of most endangered historic sites and they included the Che on the list for 2015-16. Meanwhile, the federal civil rights authorities were conducting interviews on the campus, investigating the tensions surrounding the Compton Cook Out scandal, the nooses found in the main campus library (Geisel), et cetera. Che Cafe Collective member Fabiola Orozco was interviewed by the feds about how the attack on the Che Café fit into the diversity problems.

While the occupation was going on, and seeing that it did NOT fizzle as soon as summer break started, we asked for a meeting with the chancellor, saying if he called off the eviction he could avoid the mass media spectacle of students being dragged out of the Che by sheriffs deputies. Chancellor Khosla agreed to a meeting and a delegation of members of the collective and representatives of the Che Café Support Network did meet with him on July 15, 2015. CCSN reps included Mario Torrero, representing the muralists, Susan Orlofsky, chair of the UCSD Coalition of Unions, Susan Wingfield-Ritter, representing alumni. CCC reps included Raquel Calderon, Fabiola Orozco, Paige Hancock, and Jocelyn Ordonez.

During the meeting Khosla appeared to be unaware of the importance and history of the Che Cafe as the original UCSD student center and as a pillar of campus diversity. Our delegation laid it out for him. He agreed to “suspend” action on carrying out the eviction. Khosla ended the meeting by asking all to meet the next day with his subordinate, Vice Chancellor Juan Gonzalez, to continue negotiations. We said we had been meeting for months with Gonzalez and other subordinates without getting anywhere, and asked why we should do that anymore. Khosla answered that the reason was that NOW he was ORDERING them to resolve the issues of conflict WITHOUT carrying out an eviction.

CCC and CCSN then began months of meetings with admin. First we got admin to agree to pay for us to bring in our OWN professional architects and engineers firm to provide a ‘second opinion’ on the previous ISES report and the admin’s internal facility analysis. That report (some $10,000 worth) stated the building was fundamentally sound. This contradicted the prior reports which had been commissioned by UCEN Director Van Bruggen (the questions must have been skewed). Then, admin offered, and we agreed, that admin would pay for fire sprinklers and Americans with Disabilities Act upgrade (an accessible restroom) and some other stuff. We agreed because (1) it allowed admin to ‘save face’ and to not be publicly shamed about the massive lying they did about “fire safety” being a real issue and (2) because admin said the chancellor’s and

Vice Chancellor’s discretionary funds would be used to pay for it, NOT student body funds and (3) the admin was also agreeing to let the CCC join the 3 other co-ops to negotiate a new lease to succeed the 2006-2016 one set to expire April 30, 2016. Admin however refused to ask the court to set aside the eviction ruling, and insisted on holding that over our heads during the whole period of negotiating a new lease. So from July 13, 2014 until now, July 1, 2017, CCC has had NO lease and NO legal permission for month to month holdover. One might say really that the occupation of the Che started on July 13, 2014 and has continued until the new lease was signed (it just wasn’t a full-blown 24/7 sit-in during the whole time).

During all of the lease negotiations after the Che joined the already in progress talks between the other 3 co-ops and admin, the fact that Van Bruggen was NOT fired, and was instead placed at the table as a main person on admin’s negotiation team, caused us to have to contend with repeated hostile proposals from admin, and repeated resistance to many of our proposals. It appeared all along that the chief admin negotiator, UCSD Chief Counsel Dan Parks, was not strongly attached to any of the hostile proposals. But we wasted huge amounts of time explaining to Parks why we should or should not have this or that wording in the new lease. Fortunately for us, the original order of the Chancellor to resolve the Che issues was the foundation upon which all of these negotiation points were addressed. And, fortunately for us, the Chancellor’s marching order was well considered, because we truly did (and still do) have not only massive public support, but the skills and the capacity to mobilize that support.

UC San Diego Faculty Association statement of support for Che Café (copy/paste this url into your browser to see the statement):
http://ucsdfa.org/sdfa-opposes-the-unilateral-eviction-of-the-che-cafe/726 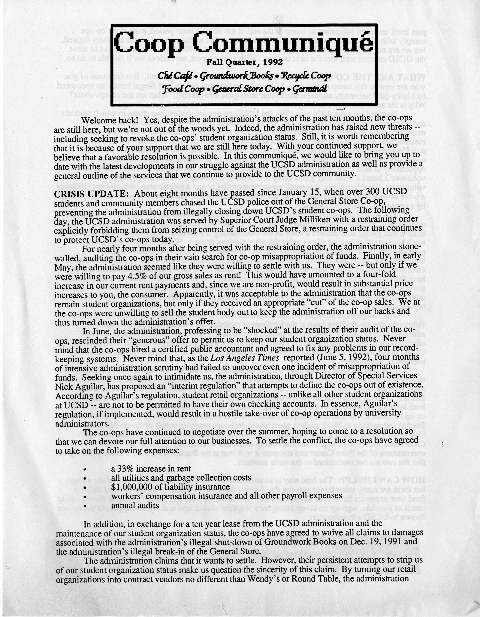 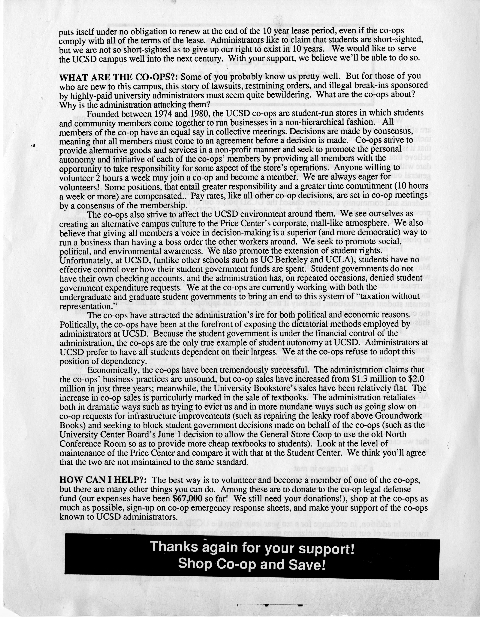 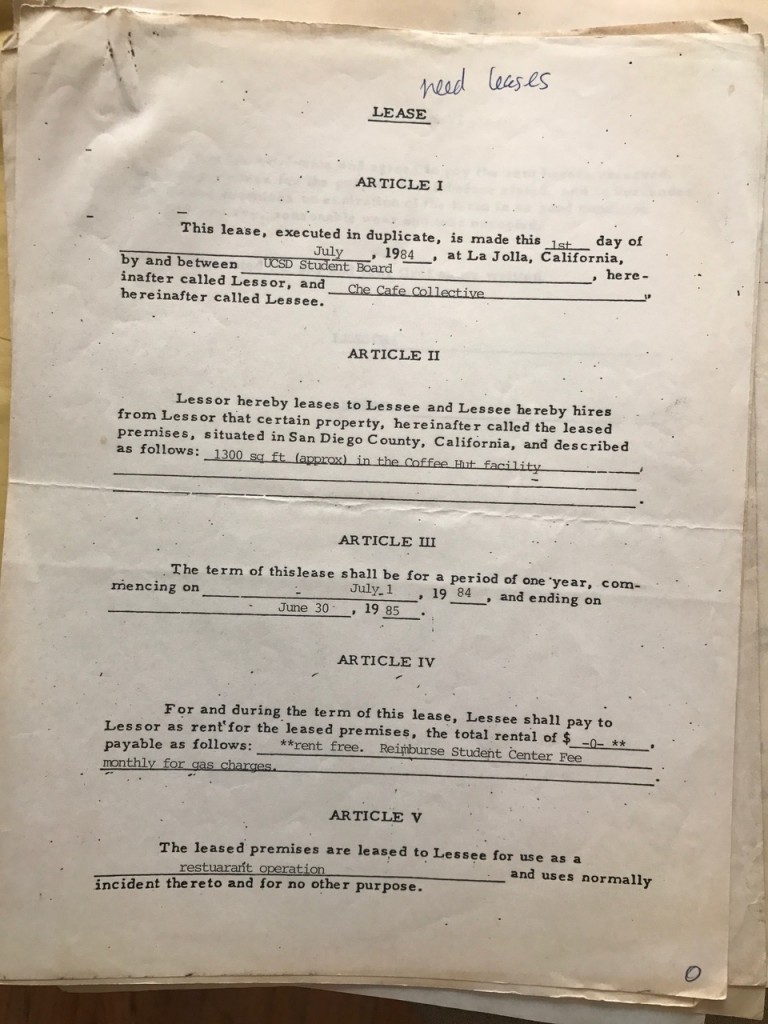 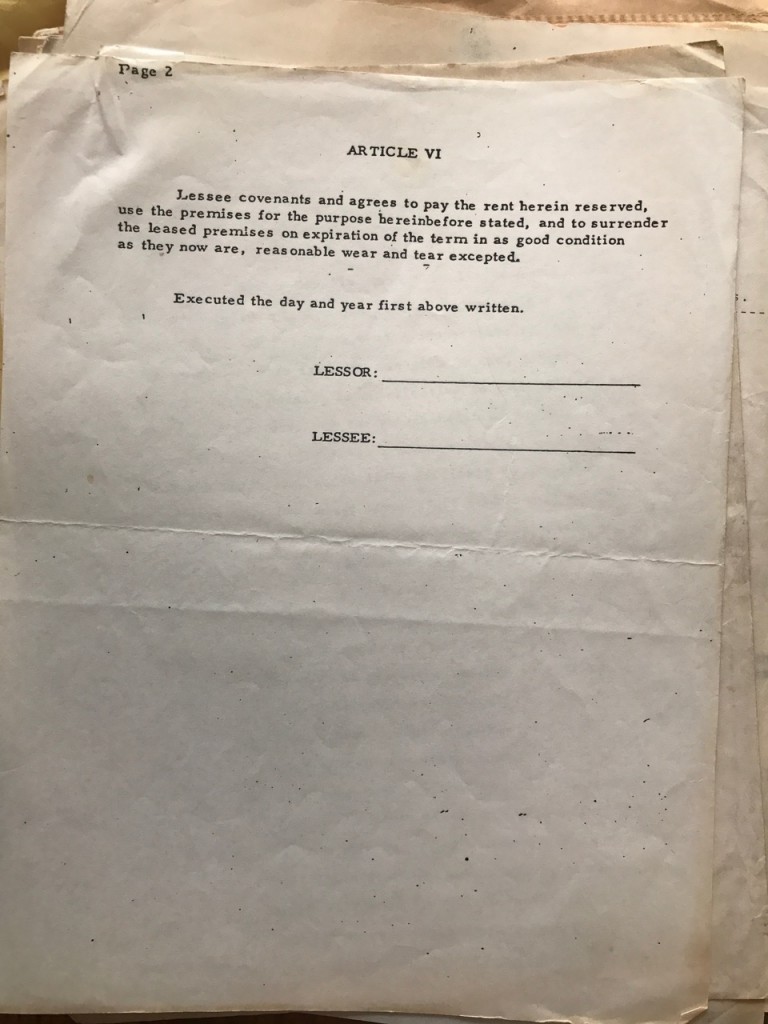 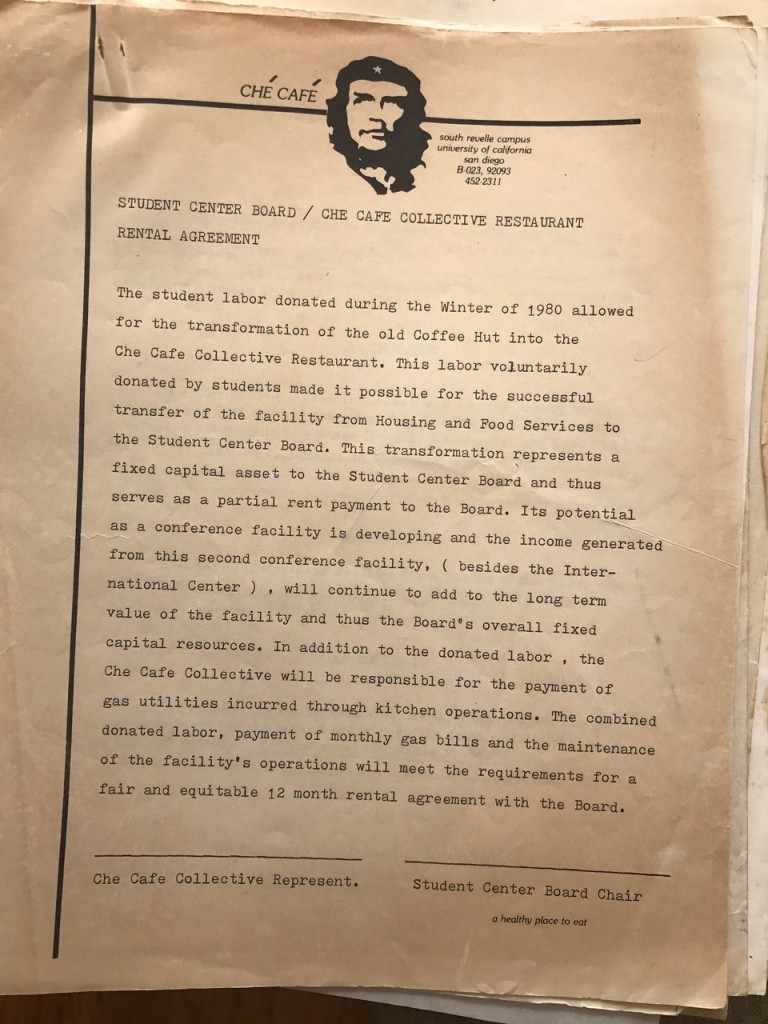