“The worst in collegiate journalism since 1982!” The Koala, a student publication at the University of California, San Diego, boasts on its home page.

The decision by the U.S. Court of Appeals for the Ninth Circuit overturned a lower court’s 2017 ruling dismissing The Koala‘s lawsuit against UCSD. The appeals court found that the student publication had offered sufficient evidence to suggest the university (and its student government) had changed their policies for funding student groups to single out and retaliate against The Koala. 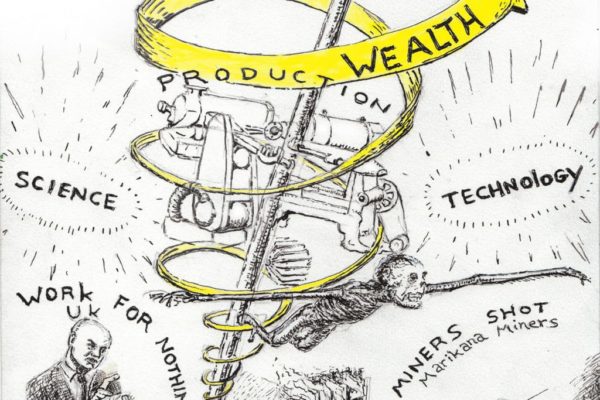 A CNN poll released early in May this year showed that 56 percent of Americans approved of President Trump’s economic policies.

‘It tells me, among other things, that the prosperity cycle we have entered into is continuing, it is strong. It has legs and momentum and frankly it is going to go on for quite some time,’ he continued. ‘This is the new Trump economy. Some people don’t like that or they don’t agree with that. I respect the differences but I’ll tell you it’s working.’

…on this business about the bad distribution, the blue collar workers have done the best. The unemployment rate is low, we just had the best June stock market, the Dow Jones, in 80 years…

He asserted: “The American economy is booming.”

The numbers released by the Bureau of Labor Statistics (BLS) appear to support these views or do they?

First, Mr. Kudlow ignores the fact that 10 percent of households in America own 84 percent of stock shares directly or indirectly through mutual funds, trusts, or various pension accounts.  This was reported in a paper by New York University economics professor Edward N. Wolff in Nov. 2017.

Reports by the Federal Reserve, Gallup, and Bankrate confirm that the spectacular rhythms of the stock market are irrelevant to the vast majority of Americans.

Back to the numbers on Main Street.

Cost of living calculators report the amount of money required to maintain basic standards of living in various localities by expenses such as housing, groceries, taxes, and health care.

The Economic Policy Institute created a Family Budget Calculator that measures the income a family requires to attain an adequate standard of living. In Boston, for example, the income required for two adults and two children is $111,724. This is not an anecdotal padded estimate. The costs of an adequate standard of living are rising to ridiculous levels.

Aside from the monthly employment report, the BLS also compiles the Consumer Price Index (CPI), our primary inflation gauge.

Unless you had no housing or transportation expenses in the last year, your cost of living probably rose at least 2.7 percent.

That being the case, a 2.8 percent wage gain is a pittance.

We should know how the overwhelming majority of Americans are maintaining themselves and their families. The United States Census Bureau (USCB) provided an answer.

The USCB data showed that the bulk of gains in real income in 2016 was due to an increase in employment hours. That means that work hours increased, not real wages. Another consideration is that working more hours means higher expenditure on income related necessities, such as commuting, childcare costs, and costs for caring for dependents.

Besides the unemployment rate and jobs created data, the BLS also presents reports of wages and salaries. This is essential information in determining the impact of the economy on working people.

Despite the Trump administration’s celebratory proclamations of recent wage growth, the numbers tell a different story.

A widely publicized study on the decline of the economy for working people was from the Federal Reserve Board‘s Economic Well-Being report in May 2018. It reported that four in 10 adults in the country could not afford a $400 emergency expense.

Career Builders released a report in Aug. 2017 that found 78 percent of U.S. employees are living paycheck to paycheck.

The BLS reported that real hourly earnings increased 1.2 percent over 12 months from April 2018 to April 2019. However, the inflation rate for the 12 months was 2.0 percent. That’s losing ground.

In June 2018, the BLS reported that from May 2017 through May 2018, average real inflation adjusted hourly wages for the largest demographic of workers fell by 0.1 percent. That demographic comprises production and non-supervisory workers; it constitutes about 80 percent of the privately employed workforce. More ground lost.

They reported in January this year that real wages declined in 2018. When adjusted for inflation, the increase was 1 percent for the past year. In fact, when adjusted for cost of living and CPI, real wages actually declined 1.3 percent since the end of 2017.

According to the Payscale Index since 2006, pay has decreased -9.5 percent with inflation. Huge ground lost.

The Financial Advisor reported in March 2018 that the rate of low wage jobs has remained relatively stagnant since 2012. In six states (Alabama, Arkansas, Louisiana, Mississippi, New Mexico, and West Virginia), more than one in three jobs is in a low-wage occupation.

The Federal Reserve Bank’s Board of Governors met with the Community Advisory Council in November 2017. They reported that despite the apparent drop in unemployment, there was no increase in the number of quality jobs.

The Opportunity Index: Opportunities in Urban America reported in October 2018 that just 38 percent of jobs in the U.S. pay enough to afford a middle income lifestyle for a dual income with children. 32 percent of jobs pay a living wage and 30 percent pay a “hardship” wage.

The 2017 Scorecard reported that one in four jobs in the country is in a low-wage occupation.

The Bureau of Labor Statistics (BLS) releases two reports measuring unemployment and jobs created.  The most popular is the Current Employment Statistics (CES) a.k.a. Payroll Survey/Establishment Survey. The other is the Current Population Survey (CPS) a.k.a. the Household Survey. The BLS measures unemployment through the CPS conducted each month by the United States Census Bureau (USCB).

The BLS utilizes a seasonal adjustment to remove influences of predictable seasonal patterns. This includes weather, harvests, major holidays, and school schedules. This adjustment is included in all the numbers referenced here.

The BLS also presents various reports on pay and benefits.

The employment and jobs created reports are a skewed view of the economy.

The CES reports are released to the public usually on the first or second Friday of the month. The jobs creation are revised twice after their initial release. The revisions include additional sample information and recalculated seasonal adjustment variables.

What often goes unreported by the corporate media are the revisions essential to present a more accurate number of unemployment and jobs created. This approach often affects how working people view the economy and their place in it.

Kevin Carmichael of “FiveThirtyEight” in December 2017 provided an example of the mercurial monthly report. The BLS revised its August 2017 report for July jobs. The press and mainstream economists responded to the 209,000 new jobs. Predictably, President Trump grasped on to the numbers and extolled them as a spectacular result of his economic policies.

However, when the BLS reported the revised job numbers in October it was 189,000; it was revised again to 138,000. That notable decrease was rarely mentioned in the media. Unsurprisingly there were no tweets from the president.

Another variable not discussed is how many jobs are required each month to keep pace with the population growth.  Business Insider estimated in August 2016 that on average, 205,300 jobs need to be created every month. Most economists place the number at around 150,000 jobs.

It is difficult to get a man to understand something when his salary depends on him not understanding it.

We expect those in positions of economic and political power in the United States to rely on fabrications, misrepresentations and oversimplifications to justify the economic constructs that benefits their tiny numbers.

It is a bit disappointing to review the standard measure of unemployment that the BLS disseminates to the media and public each month.

The BLS has six categories of unemployment measures. The standard measure is the U-3 unemployment rate. This category is promulgated by the BLS despite its limitations. The U-3 rate measures:

It does not include:

The BLS does have a category that is more accurate which is the U-6 rate. It combines those in the first two components above with the standard U-3 measure.

Clearly, the U-6 rate is a more accurate representation of the actual unemployment rate. It is usually double or triple the standard U-3 rate.

For example, the BLS U-3 unemployment rate for this April was 3.6 percent. It was distributed over the mainstream media as evidence of a “booming” economy.

Economist Arthur MacEwan of the University of Massachusetts broke down the U-6 category. He identified the group of marginally attached people as 1.42 million for this April.

Economist Martin Wolfson of the University of Notre Dame further identified another group of people in the U-6 rate. They are people with part-time jobs for economic reasons numbering 4.65 million.

None of these people would be counted in the standard U-3 category.

The third component consisting of people who have part-time jobs for non-economic reasons is a bit complicated.  The numbers are quite high (21,322,000 for this April) and not included in the labor force number. It is speculative as how many of these folks would choose to work full time if their personal situations changed.

However, combining the marginally attached numbers with the part-time economic reason numbers in the U-6 rate resulted in the April unemployment jumping from the original 3.6 percent rate to 7.3 percent. 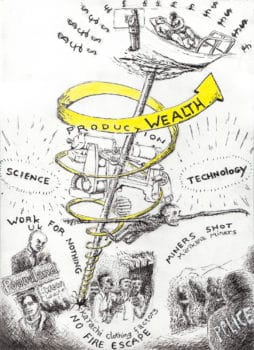 “The situation of the worker,” inspired
by Chapter 25 of Karl Marx’s, Capital.
This is just a small taste of a series
of drawings created to
illustrate Marx’s laws of motion of capital.
There is at least one illustration for
each chapter of Capital, vol. 1.

It’s largely the corporate media that willfully ignores these changes to the BLS reports. The effect is to create a false narrative that can impel working people to bewilderment and self-recrimination. If the economy is “booming” for so many as the monthly reports suggests with increased job numbers and falling unemployment rates, it should be improving their lives but it’s not.

Distorted employment and wage and salary numbers contribute to the perception of working peoples’ views; the powerful underlying theme of job insecurity and the struggles to maintain an adequate life style is always present. Jobs have consequences.

Much has been written about spiritual and secular corrosion in our culture exacerbated by economic burdens that continue for an overwhelming majority of Americans.

Moreover, a 2019 study at the University of Miami Miller School of Medicine found that employees with dramatic income cuts had double the risk of cardiovascular disease.