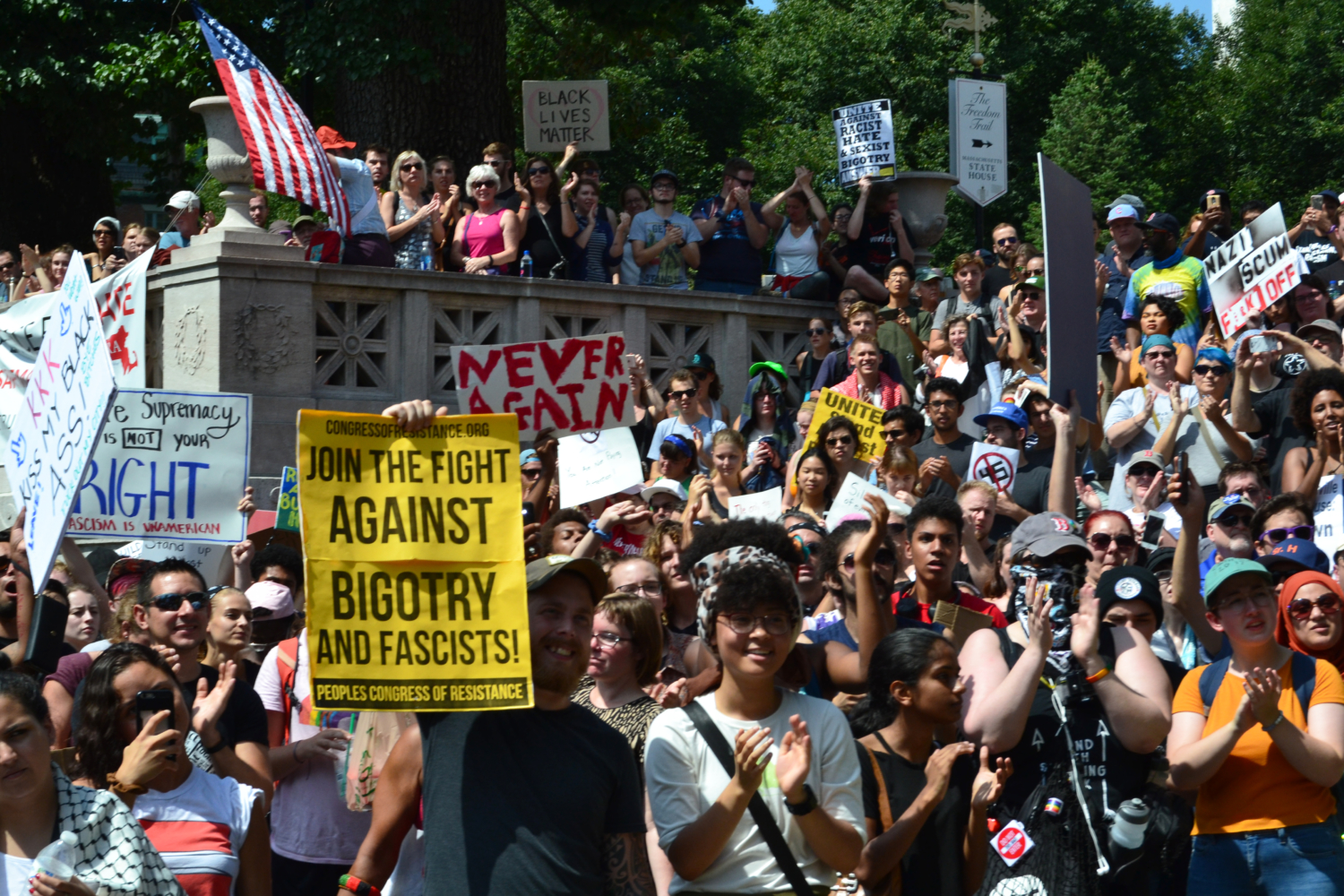 “We are the Trump vanguard.” – Richard Spencer, white supremacist, anti-Semite and leader of the “identitarian” movement.

There were “very fine people” on both sides in Charlottesville. – Donald Trump.

Many progressives are still reluctant to take the fascist “alt-right” seriously. Others hope that if we just ignore them they will go away. Their perspective seems to be that until the Nazi flag is flying from the White House we can afford to ignore the threat posed by American fascists. 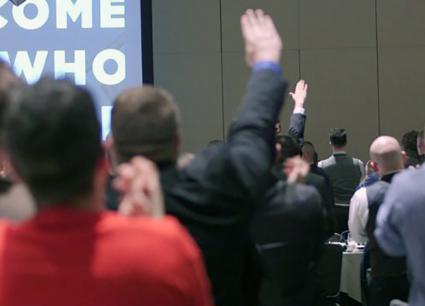 A definition and some historical perspective are in order. When the Soviet Union was trying to build a worldwide coalition against fascism in the mid-1930s, it and its allies described fascism as “the open, terroristic rule of the most reactionary, most chauvinist wing of the ruling elite.” That definition works well to describe a fascist state, like Germany in 1935.

Fascism today is a social and political movement: (1) Pre-occupied with complaints of exclusion, impoverishment, and marginalization (They chanted “we will not be replaced by Jews” in Charlottesville.); (2) Obsessed with hatred for the people they blame for their decline – Blacks, feminists, Jews, Latinx immigrants, queers, Muslims; (3) Violent; and (4) Supported financially and politically by factions among the “respectable” right-wing elites. Individuals like Richard Spencer try to bridge the social gap between the thuggish gangs and their better dressed funders.

Fascism came to power suddenly and legally in a Europe facing many of the conditions America experiences today. Just as in Europe in the 1920s, economic decline has degraded the living standards of millions of working class families, and the country’s political institutions and elected leaders are hopelessly polarized and ineffective. The fascists of the 1920s seemed marginal and even somewhat absurd.

The Fascist Party that Mussolini led had just a few hundred members prior to 1921 when it was invited to join the government. In 1922, as conditions in the country became more and more chaotic as a result of economic decline and political fragmentation, the fascists numbered in the tens of thousands, and King Victor Emmanuel invited Mussolini to form a government. By 1925 he had turned Italy into a one party, totalitarian state. And all this by a man whose “attitudes were highly theatrical, his opinions were contradictory, his facts were often wrong, and his attacks were frequently malicious and misdirected.” That statement could easily have been written about Trump.

Hitler and the National Socialists were dismissed and ridiculed early in their rise to power. Before 1930, they received less than three percent of the vote in successive national elections. A few years later they grew exponentially as the Great Depression drove millions of Germans into unemployment, poverty, and fear. Hitler was a powerful orator, who promised to restore Germany’s pride and prosperity. Trump again?

In 1933 German President Paul von Hindenburg appointed Hitler as Chancellor. His legacy was the murder of six million Jews and hundreds of thousands of “social deviants,” 100 million dead in World War 2.

Even before the rise of fascism in Europe, the United States experienced the rise of its homegrown, fascist movement, the Ku Klux Klan. Founded as a social club in Pulaski, Tennessee in 1866, the KKK quickly grew as a terrorist vehicle for whites fighting against their perceived displacement and frustration. The Klan’s growth in the South followed the end of the civil war during the Reconstruction period and the short-lived empowerment of newly freed African Americans.

No-one seems to know precisely the extent of the carnage inflicted by the Klan, but few would dispute that its toll of murdered African Americans numbered in the tens of thousands. After a period of decline the KKK expanded exponentially to at least four million members during the 1920s, including business people, preachers, and politicians in every state in America. The Governor of Indiana was an open member. The Klan’s decline came at its own hand in a series of financial and other scandals.

But the KKK never disappeared. During the 1960s Klan members committed the most notorious acts of violence against the civil rights movement. KKK and White Citizens Council member Byron De La Beckwith assassinated NAACP leader Medgar Evans on June 12, 1963, in Jackson, Mississippi. On September 15, 1963, four Klansmen planted at least 15 sticks of dynamite at the 16th Street Baptist Church in Birmingham, Alabama, killing four young Black girls and injuring 22 others. On June 21, 1964, civil rights workers James Chaney, Michael Schwerner, and Andrew Goodman were arrested by police near Philadelphia, Mississippi, and then turned over to Klansmen who beat and murdered them. On November 3, 1979, Klansmen and Nazis, with the help of local and federal law enforcement officers, carried out an armed attack on an anti-Klan rally at a Greensboro, North Carolina, public housing project. A caravan of 10 or more cars and pick-ups pulled up to the project. White men got out of the vehicles, opened their trunks, pulled out rifles, shotguns, and pistols, and began shooting. When the smoke cleared five people were dead and many more wounded, some seriously. The victims had been carefully selected from the crowd – union leaders and community activists, most associated with the newly announced Communist Workers Party.

Some of the murderers were indicted, tried, and freed, demonstrating the Klan’s ongoing influence in a state then lauded as symbolizing the “New South.” Despite overwhelming evidence, including videotape of the attack, the Klansmen were acquitted in a federal criminal trial in which they successfully turned the tables on the “communist provocateurs.” Only after years of community organizing around the theme of reconciliation did public sentiment change to support of the victims and condemnation of the violent rightists and their law enforcement allies.

Donald Trump and the fascist right have supported each other since the early days of his campaign. Trump is easily the most racist president in U.S. history, quite an accomplishment among a group including Andrew Jackson and Woodrow Wilson. Trump has never shied from racist rhetoric and action.

Along with his father Fred, who was arrested during a 1927 KKK demonstration that turned into a riot in Queens, New York, Trump and his building management company were sued by the Civil Rights Division of the Justice Department for housing discrimination in 1973. Two years later they entered into a consent decree with the government.

Trump bought full-page ads in four New York City newspapers calling for the harsh punishment and “suffering” of five young African American and Latino men who were wrongly convicted of assaulting and raping a white woman in New York’s Central Park in 1989. Long after the Central Park Five were freed, Trump continued to maintain that they were guilty.

During his campaign for President Trump refused to disavow the support of the KKK leader David Duke and falsely claimed that he did not know who Duke was. But years earlier Trump had refused to join Duke in the Reform Party.

Trump’s campaign for president escalated his practice of racist attacks. He may have been the last prominent American to promote the lie that Barack Obama was not born in the U.S. He has viciously and persistently attacked Mexican immigrants as “rapists” and continues to make building a border wall his priority, a demand that plays well to his right-wing support. He panders to prejudice against Muslim people and seeks to bar immigration from countries with Muslim majorities. In one of his most overtly racist statements he recently slandered Haiti and African nations as “shit hole” countries.

Richard Spencer and his fascist allies welcome Trump’s support and act accordingly. The KKK, Nazis, and their partners openly proclaim their intent to kill Jews, Blacks, Muslims, and people from Latin America. Dylann Roof acknowledged his racist inspiration for the massacre of nine African Americans in a Bible study class at Emanuel African Methodist Episcopal Church in Charleston, South Carolina on June 17, 2015. Fascists stabbed at least seven people, most African Americans, at a rally in Sacramento in June 2016. 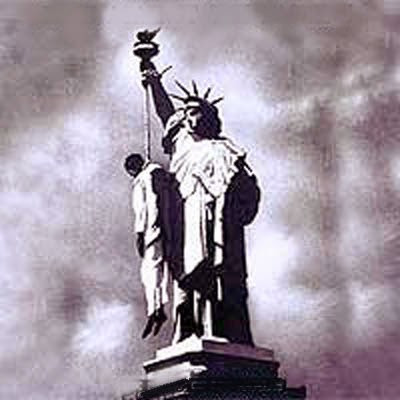 On January 29, 2017, Alexandre Bissonnette, a fan of Trump and of French rightist Marie Le Pen, killed six people and wounded 19 at the Islamic Cultural Centre of Quebec City. Oregon white supremacist Jeremy Christian stabbed to death two men who stood up against his anti-Muslim hate speech towards two young women on a Portland light rail train on May 29, 2017.

As Trump continues to unravel, his racist rants escalate. As his support diminishes, the far right remains his most loyal base. The history of the last several years makes it reasonable to predict that fascist violence will continue to grow.

The struggle to eliminate fascism as a political force in the United States will require a variety of strategies and tactics. The rise of fascism has an ideological or social basis in the tradition of “American Exceptionalism” and white supremacy. Its growth today also has a material basis in the declining incomes and opportunities for class mobility experienced by many sections of the white working class.

But complaints of exclusion, marginalization, and impoverishment made by whites attracted to fascist movements are not dissimilar from the complaints by people of color about their own conditions. Strategies for improving the living standards of all low income and working class people will impact the lives of many who are now attracted to Trump and his fascist allies, as demonstrated by the appeal of both Bernie Sanders and Trump in some working class communities during the 2016 election.

Successful struggles to increase the minimum wage and for full employment; for affordable housing; and for quality education and health care, including mental health and addiction treatment, will both advance the goals of the progressive movement and erode the attraction of the far right. We should not naively think we can transform the hard core fascists or their elite supporters, but a political movement that advances the interests of middle class, working class, and poor Americans can divide the fascist leadership from many potential supporters.

Mass protests on a variety of issues including women’s rights and gun control remain critical. Antifa (anti-fascist) activists have taken the lead in refusing to allow fascists to occupy public spaces in Boston, Berkeley and elsewhere. While everyone may not be willing or able to confront fascists in the streets, we should all respect antifa’s leadership.

The American left cannot treat the anti-fascist struggle as just one of a number of competing single-issue concerns. Fascism represents the most extreme element of the reactionary forces seeking to block people’s struggles for social, racial, political, and economic justice. None of these struggles can succeed unless people unite to eliminate the threat of fascism in the United States. Trump has helped make the extreme right groups like the nazis and KKK feel emboldened to come out in the open as they did here in Charlottesville. | Steve Helber/AP

Dan Siegel is a civil rights attorney  and activist based in Oakland, California. You may reach him at DanMSiegel@gmail.com.

No comments yet Categories: Uncategorized
« Saving Face: Fire Sprinklers for Che Café and Why
Day of Solidarity with J20 Defendants »