The IWW FJU is a union for all freelance journalists, bloggers, and other writers in the news media. Contact us today! You have nothing to lose but your unpaid invoices!

We’re a group of freelance journalists, bloggers, and other writers in news media from all around the world, organizing to improve our working conditions and assert our rights.

In the tumultuous, insecure world of contemporary news media, more and more of us are forced to work on a freelance basis. While it’s difficult to put a precise estimate on the numbers, self-employed writers make up the majority of the profession in the United States and there are legions of us around the world.

Publicizing this union comes after a months-long organizing effort in which we’ve had one-on-one conversations with hundreds of freelance journalists and group meetings with dozens, discussing the struggles that members of our profession face and how we can collectively overcome them.

Many of us deal with long overdue payments, low rates, vast pay disparities, exploitative contracts and frustrating invoicing systems at publications throughout the industry. While nearly every news outlet relies on freelance labor, few are committed to treating workers with dignity and providing fair compensation.

In order to change these conditions, and to gain power through solidarity, we created the Freelance Journalists Union. The FJU is part of the Industrial Workers of the World, an international, member-run union for all workers, which was established in 1905. 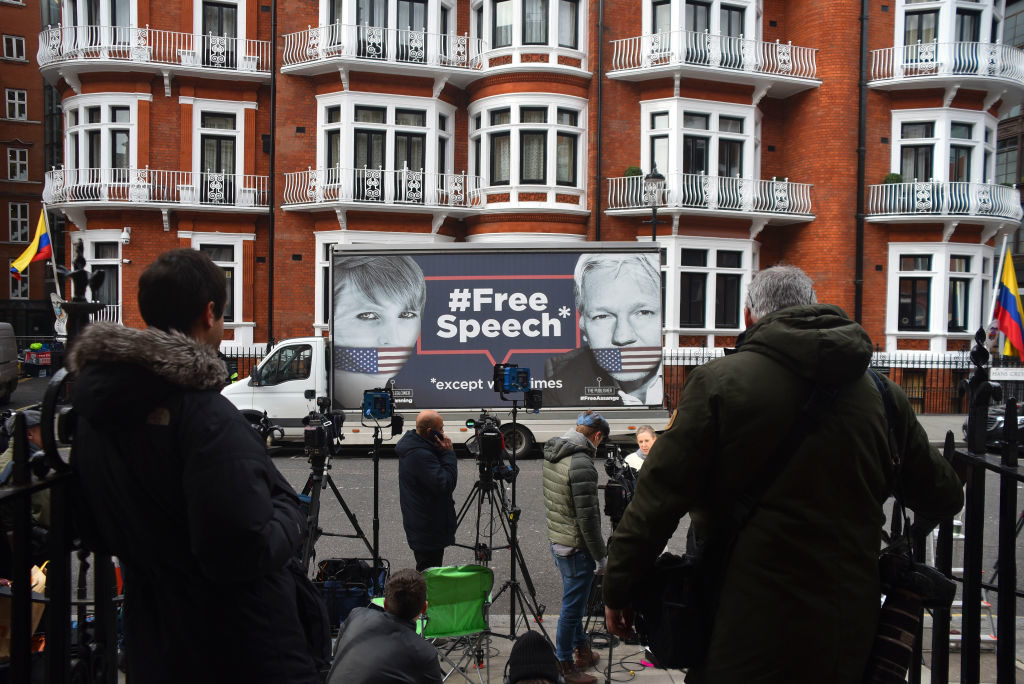 by Camille Fassett, Reporter for Freedom of the Press Foundation
Promoting press freedom in the 21st century
April 11, 2019

Today, WikiLeaks publisher Julian Assange was arrested by British authorities after Ecuador terminated his asylum status. He has been charged for alleged conspiracy with whistleblower Chelsea Manning under the Computer Fraud and Abuse Act, and faces potential extradition to the United States — a country with an extensive history of targeting whistleblowers with punitive sentences in prison. The details of the charge are fraught with press freedom implications and could potentially criminalize many common interactions journalists have with sources.

Here’s what numerous civil liberties and digital rights groups had to say about the implications of Assange’s charge and arrest.

For years, the Obama administration considered indicting WikiLeaks publisher Julian Assange, before rightly concluding it could not do so without encroaching on core press freedoms. Now almost nine years in, the Trump administration has used the same information to manufacture a flimsy and pretextual indictment involving a “conspiracy” to violate the Computer Fraud and Abuse Act—based entirely on alleged conversations between a journalist and source. While the Trump administration has so far not attempted to explicitly declare the act of publishing illegal, a core part of its argument would criminalize many common journalist-source interactions that reporters rely on all the time. Requesting more documents from a source, using an encrypted chat messenger, or trying to keep a source’s identity anonymous are not crimes; they are vital to the journalistic process. Whether or not you like Assange, the charge against him is a serious press freedom threat and should be vigorously protested by all those who care about the First Amendment.

Any prosecution by the United States of Mr. Assange for Wikileaks’ publishing operations would be unprecedented and unconstitutional, and would open the door to criminal investigations of other news organizations. Moreover, prosecuting a foreign publisher for violating U.S. secrecy laws would set an especially dangerous precedent for U.S. journalists, who routinely violate foreign secrecy laws to deliver information vital to the public’s interest.

The potential implications for press freedom of this allegation of conspiracy between publisher and source are deeply troubling. With this prosecution of Julian Assange, the U.S. government could set out broad legal arguments about journalists soliciting information or interacting with sources that could have chilling consequences for investigative reporting and the publication of information of public interest.

While we investigate the implications of the US Justice Department’s charges against Julian Assange, which are specific to his interactions with a source, we reiterate our concern that the prosecution of those who provide or publish information of public interest comes at the expense of the investigative journalism that allows a democracy to thrive.

While the indictment of Julian Assange centers on an alleged attempt to break a password—an attempt that was not apparently successful—it is still, at root, an attack on the publication of leaked material and the most recent act in an almost decade-long effort to punish a whistleblower and the publisher of her leaked material. Several parts of the indictment describe very common journalistic behavior, like using cloud storage or knowingly receiving classified information or redacting identifying information about a source. Other parts make common free software tools like Linux and Jabber seem suspect. And while we are relieved that the government has not chosen to include publication-based charges today, if Assange is indeed extradited, the government can issue superseding indictments. It should not do so. Leaks are a vital part of the free flow of information that is essential to our democracy. Reporting on leaked materials, including reporting on classified information, is an essential role of American journalism.

The indictment and the Justice Department’s press release treat everyday journalistic practices as part of a criminal conspiracy. Whether the government will be able to establish a violation of the hacking statute remains to be seen, but it’s very troubling that the indictment sweeps in activities that are not just lawful but essential to press freedom—activities like cultivating sources, protecting sources’ identities, and communicating with sources securely.

The arrest sets a dangerous precedent that could extend to other media organizations such as The New York Times, particularly under a vindictive and reckless administration that regularly attacks journalistic enterprises that, just like WikiLeaks, publish leaked materials that expose government corruption and wrongdoing. This is a worrying step on the slippery slope to punishing any journalist the Trump administration chooses to deride as ‘fake news.’